The chemical reaction that makes concrete so solid 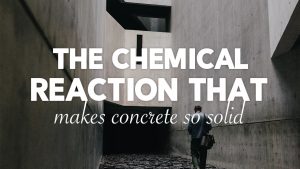 Concrete has been used as a building material for thousands of years. And despite the incredible technological developments seen in recent centuries and even decades, it remains as vital a construction material to today’s concrete waterproofers in Sydney as it was to cultures that stretch as far back as the Ancient Romans.

The reason for this eternal popularity can be put down largely to the material’s strength and durability. It’s one of the toughest materials ever discovered; it features in Ancient Roman ports that still stand despite being battered by waves for over 2000 years. It forms the hoover dam, which some experts predict will hold back the Colorado River for another 70,000 years, even without maintenance.

But how does this material, which is made from nothing more than water, powder and grit, become so strong? Well, the secret to its incredible strength can be found in the chemical reaction that causes it to turn from liquid to solid.

At its most basic, concrete is made up of three simple ingredients – cement, grit (usually in the form of sand or gravel), and water. Both the cement powder and grit in their pure forms are anhydrous (devoid of water). When they come into contact with water a chemical reaction is set off.

This chemical reaction first dissolves the most susceptible elements of the cement powder – sulphate and gypsum – which turn the water into an alkaline, sulfate-rich solution. The next part of the cement powder to react to the water is aluminate (C3A), which turns into a gel. This gel in turn reacts to the sulfate solution, at which point the beginnings of solid concrete appear. The mix can then be best described as ‘gluggy’, and is ready to pour into a slab.

From here the concrete will harden, as the hydrated elements of the cement mix begin to react with the still anhydrous elements – alite and belite. This process generates heat and gas (making the concrete porous), and usually occurs between 10 and 20 hours after the mix has been poured. While this process begins to tail off after this time, the concrete will continue to get stronger and stronger for us to a month.

And so, after the concrete has fully set, you have a product that is almost unbeatable in terms of strength and durability, and has been for over 2 millennia.

Want to know more about the benefits of using concrete on your construction project? Call the concrete waterproofing experts today on 1300 761 219.