Can concrete waterstops be installed in set concrete? 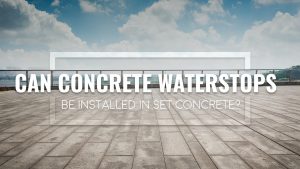 Concrete, despite being a notoriously strong construction material that we now use for almost any construction project, has one glaring weakness. Moisture. This is because concrete is a naturally porous material, allowing water to sieve through it like a sponge which can eventually effect the structural integrity of the material.

Waterstops are critical to the waterproofing of almost any concrete structure. They are employed in areas of greatest weakness – the joints of the concrete that are more likely to allow moisture in. Their design is incredibly simple – just a flexible strip of material (generally rubber or PVC) which is moulded to sit flush in a concrete joint and stop the infiltration of moisture.

Can waterstops be installed in set concrete?

The short answer is no. Waterstops are designed to be installed in poured concrete. Having the concrete set on the waterstop ensures that the seal between the concrete and the waterstop is perfectly tight. Vibration machines should be used to make the seal as snug as possible, something that simply can’t be achieved if you install a waterstop in concrete that’s already set.

What’s more, a waterstop is generally installed within the concrete. While the focus is on protecting the joints of a concrete structure, the entire piece is encapsulated on all sides by concrete, which would be impossible to do if the concrete has already been set.

What if I want to better protect concrete that has already set?

If your concrete has been set without waterstops in site, the focus should turn to waterproofing the exterior of the slab. Techniques such as torch on membrane waterproofing and epoxy coating will ensure that at the very least each of your individual concrete slabs won’t soon feel the effects of intrusive water.

For installation of waterstops, call the concrete waterproofing experts at 1300 761 219.